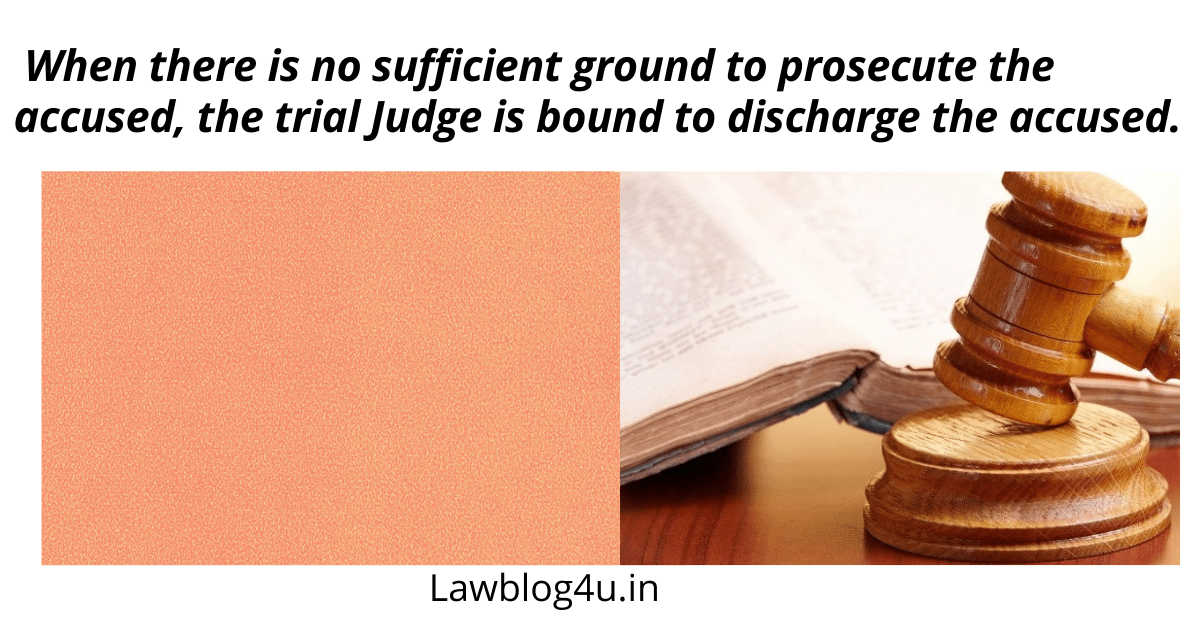 Criminal P.C. (2 of 1974), S.227- It is clear from Section 227 that the trial Judge is bound to discharge the accused if he considers there is no sufficient ground for proceeding against him.

First, we have to know what the provision of section 227 of Crpc is saying?

Section 227 of the Criminal Procedure Code,1974; After considering the case record and document submitted; and after hearing both parties. If the judge concludes that if there is no ground to proceed against the accused, he can discharge him by recording the reason for doing that.

The judge has the power to discharge the accused after considered all records and concern hearing regarding the case of parties. In lack of sufficient ground against the accused, he shall discharge him with details of record reason for that order.

In the case of R.S. Nayak vs A.R. Antulay & Anr, (1986 AIR 2045), the Supreme court held, according to the provision of Criminal procedure code, 1874, under section 227, the trial judge can discharge the accused when he considers that is no sufficient ground for proceeding against him.[1].

In the case of P.Vijayan vs State Of Kerala & Anr, (2010 AIR SCW 886), The Supreme court observed that Court is empowered to discharge the accused if two views are possible and one of them gives rise to suspicion only, as distinguished from grave doubt. Whether the trial will end in conviction or acquittal is not relevant at this stage.[2].

Sufficient ground for proceeding against accused:

The court considers the material on record, and in view of the presumption, concludes that if any ground made against the accused, or he committed the offence or not. Due to an insufficient reason, no to proceed against him.

In the case of State Of Karnataka vs L. Muniswamy & Ors 1977 AIR SC 1489), The supreme court held that the court has discretionary power to determine the question that a sufficient reason to proceed against the accused on records is available or not. If the material records against the accused are unrebutted in that situation, the court may order a conviction to him.[3].

In the case of Union Of India vs Prafulla Kumar Samal & Anr (1979 AIR SC 366), the supreme court held that, In exercising his jurisdiction under Section 227 the Judge which under the present Code is a senior and experienced court cannot act merely as a Post-Office or a mouthpiece of the prosecution, but has to consider the broad probabilities of the case, the total effect of the evidence and the documents produced before the Court, any basic infirmities appearing in the case and so on. This however does not mean that the Judge should make a roving enquiry into the pros and cons of the matter and weigh the evidence as if he was conducting a trial.[4].

An order of discharge is not an interlocutory order within the meaning of S. 397(2) of CrPC. Let’s see some observation of court for easy to understand that;

A similar has been taken in the case of Haryana Land Reclamation And Development Corporation Limited Vs. State of Haryana, (1990 (3) SCC 588), the Supreme Court held that The Chief Judicial Magistrate’s order of discharge does not come under the definition of an interlocutory order[6].