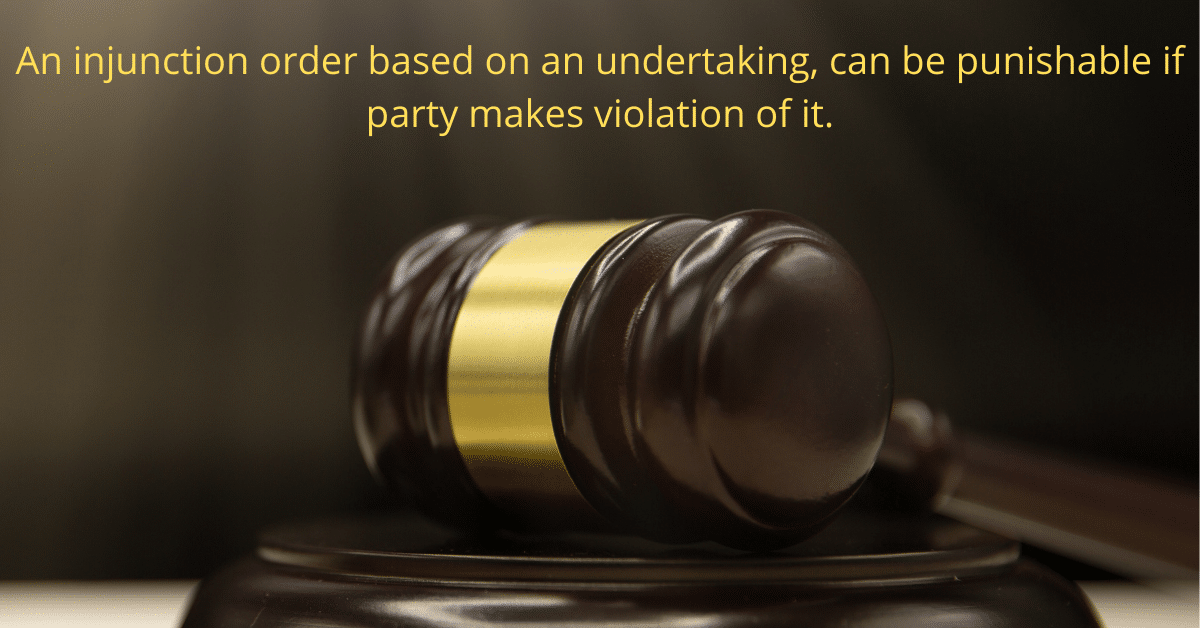 If the party has given an undertaking, it has become a ground for rejecting the injunction order. The undertaking is part of the order, and violating it makes the party liable for punishment.

Punishment for breach of an injunction under Order 39 Rule 2 (3) of the Civil Procedure Code,1908

At the time of hearing of a temporary injunction, the opposite party gives an undertaking in court to maintain the status quo. And on that ground, the court disposes of said injunction application by rejecting of injection application.

After that, if the opposite party makes any violating activities based on such injunction order, it should be count as the violence of injunction order which passed by the court based on the undertaking which the party gives in the court.

In that circumstances, the party who violence the order has to liable for punishment of his activity. And the party can be punished under the provision of order 39 rule 2(3) of the civil procedure code,1908.

This view is taken in Mangal Thakur vs. Sundar Bhagat (AIR 1977 Pat 282), the Patna High court observed in the deal of injunction application. As per the brief of the case, the plaintiff filed a civil suit for recovery of possession sought a permanent injunction for restraining the defendant not to flow their drain water.  And also, he prays not to make any construction in schedule suit land in future.

The defendant’s side filed the affidavit regarding the maintained status quo not being changed on the disputed suit property. Based on such affidavit, the trial court vacates ad interim injunction order, which is already passed.

Then, the defendant making violating activities against his affidavit and makes some changes in the schedule of the suit property. Based on the plaintiff’s complaint, the court found the defendant is guilty of his act, and the court ordered him to be detained for one week in civil jail.

The court rightly observed that the defendant who filed an undertaking by way of an affidavit is the main element of rejection of the injunction order. The court considers that affidavit as a part of said order; if the defendant violates it, it is deemed a violation of the order. On that basis, the defendant is liable for punishment for his violating. The court can order a sentence for breach of an injunction under Order 39 Rule 2 (3) of the Civil Procedure Code,1908.[1].

The court also referenced the view of the madras high court judgment A.B. Gurumurthi Chetty vs. Sella Perumal Pillai (AIR 1936 Mad 651); the court observed, When the court allows a party’s undertaking, the order becomes an injunction prohibiting him from acting in violation of the undertaking. The court will treat such undertaking as similar to an order of the court.[2].

After referring to the court’s observation and provision of the civil procedure code, we can say, in the matter of an interim injunction under Order 39 of the civil procedure code, if an opposing party files an undertaking to ensure to maintain status quo. The court can treat such affidavit as to the same of an injunction order bound by the party to violate act upon it. The court can punish a violating party for breach of an injunction under Order 39 Rule 2 (3) of the Civil Procedure Code,1908.