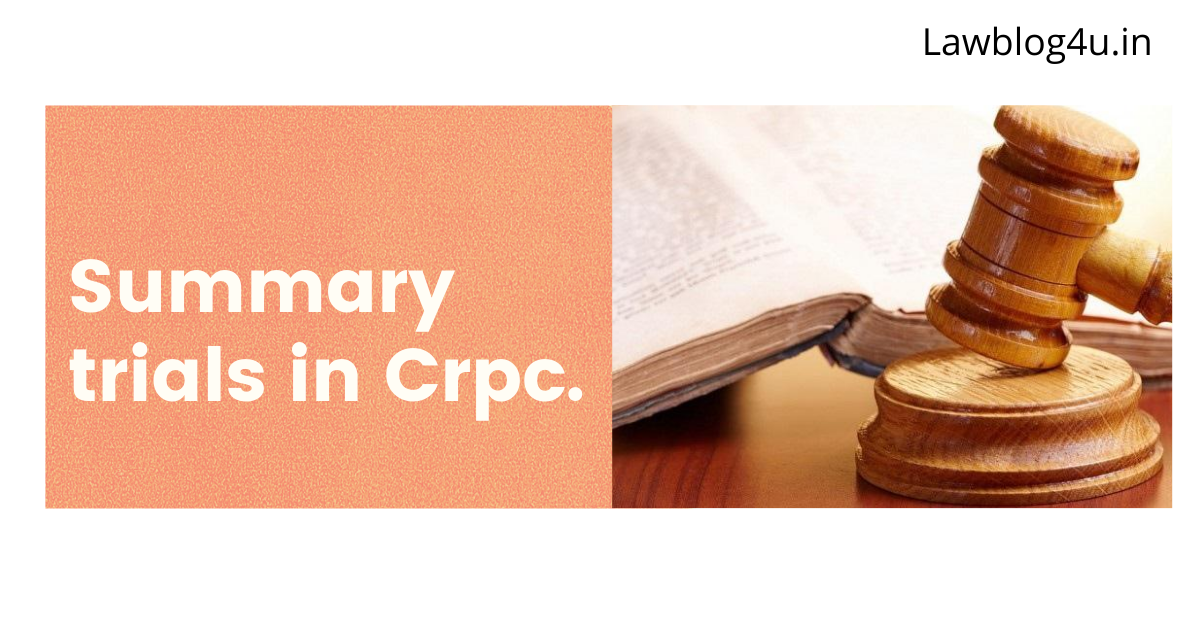 The trial could be different in every criminal case, according to the seriousness of the offense, In the provision of the criminal procedure code.

There are different types of trials, including summary trials, summons case trial, warrant case trial, trial in the high court, and trial in the sessions court. The summary is slightly different from the trial session and the warrant trial.

The code of criminal procedure (sort CRPC) 1973 is a procedural law, and the court would trial offenses under the provisions of the India Penal Code (IPC), following the rules of the CrPC. And during the trial, the presiding officer should have to keep in mind that the accused person is innocent until the allegation against him not to prove. In the same way, criminal persons must punish for the crime.

There is no definition mentioned in the trial in the Criminal procedure code. Still, we can understand that the meaning of a trial is a stage of proceedings which is starting after the framing of the charge and its end with the conviction or acquittal.

(3) What is summary trials?

The legal definition of a summary trial is to define in the Collins Dictionary of Law.2006 is that “The summary trial” in criminal procedure, a trial without a jury decided upon both on the facts and the law by a judge who may be legally qualified or maybe a magistrate (who has legal advice if required)[1].

Maximum sentences are usually lower than in cases prosecuted on indictment. A summary trial, depending on the jurisdiction, usually involves a swifter procedure and a lessening of the procedural requirements associated with serious cases. Thus, it is unlikely that the requirements of notice and lodging of documents will be so strict and the presence of shorthand writers is unlikely to be a requirement or indeed an option. In England an offense that may be charged whether on indictment or in a summary court.”

As per Wikipedia, the summary trial definition is “The summary trial, a trial of a person on a criminal charge, without a jury. A trial in a summary proceeding.”[2].

After referring to the above definition, we can say that the summary trial means the trial that speedily disposed of the cases with a simple procedure of the recording of the trial. The object of the summary trial is to dispose of cases quickly. In the summary proceeding, a formal charge is not framed.

A summary trial means a summary likewise only in respect of a recorded proceeding, and these proceedings are not such type of procedures which would do in any other criminal case. That’s way proceedings of the summary trial should be done correctly and preferably under the law.

Chapter XXI of the code of criminal procedure,1974 (Crpc), lays down in the provisions under section 260 to 265 of a summary trial.

According to this section, any Chief Judicial Magistrate, Metropolitan Magistrate, any Magistrate of the first class which is specially empowered in this behalf by the High Court, may try in a summary trial.

The magistrate is indeed a competent authority to dispose of any case Trial by summarily, and he has empowered to do so. Still, he cannot be to try every case as a summary trial routinely.

First, he has to find out that the fact which is mention in the complaint and the allegation made against the accused is triable summarily or not.

These type offenses triable as a summary trial.

As we know that the Criminal procedure Code, 1974 is a procedural law, which is covered the trial process of criminal offenses committed by the accused under the Indian Penal Code.

So, when we talk about the procedure of summary trial under section 262 of the Crpc, there is not much difference in the summary trial and summons trial, all procedures are the same, but it is a little bit different in the summary trial, In the case of any conviction under this Section 262(2) no sentence of imprisonment for a period exceeding three months shall pass.

(7) Record in a summary trial.

According to Section 263 deal with the Record in the summary trials. In all cases summarily tried, the Magistrate shall enter the following particulars in the form that the Government of the State can direct, namely:[3].

(a) the serial number of the case;

(b) the date of the commission of the offence;

(c) the date of the report or complaint;

(d) the name of the complainant (if any);

(e) the name, parentage, and residence of the accused;

(f) the offence complained of and the offence (if any) proved, and in cases coming under clause (ii), clause (iii) or clause (iv) of sub-section (1) of section 260, the value of the property in respect of which the offence has been committed;

(g) the plea of the accused and his examination (if any);

(i) the sentence or other final order;

(j) the date on which proceedings terminated.

The Magistrate shall record the content of the evidence and a decision containing a brief statement of the reasons for the finding of each summary trial in which the accused does not plead guilty.

(9) Language of record and judgments.

According to section 265 of CrPC, we should know that every record, as well as judgment, should be written in the Court language.

The High court may authorize any Magistrate empowered to try offense summarily to prepare the record and judgment, or both there should be signed by such magistrate, who is appointed on behalf by Chief Judicial Magistrate.

(10) What is the difference between a summary trial and a regular trial?

There are many kinds of differences between a summary trial and a regular trial, which are here given below.

(2) A summary trial procedure is a short-term procedure compare to a regular trial.

(3) No formal charge is required for the Magistrate to be framed in summary trials, but a formal charge sheet must be drawn up in regular trials.

(4) In a summary trial recording of evidence not necessary, only a basic summary is enough, But in the regular trial, there is compulsory to record the full evidence.

(5) In the summary trial the only basis of witness’s evidence to be kept, no need to maintain a separate record of each evidence, but in a regular trial, every witness separate record must be kept.

(1) The legal definition of a summary trial is to define in the Collins Dictionary of Law.2006.