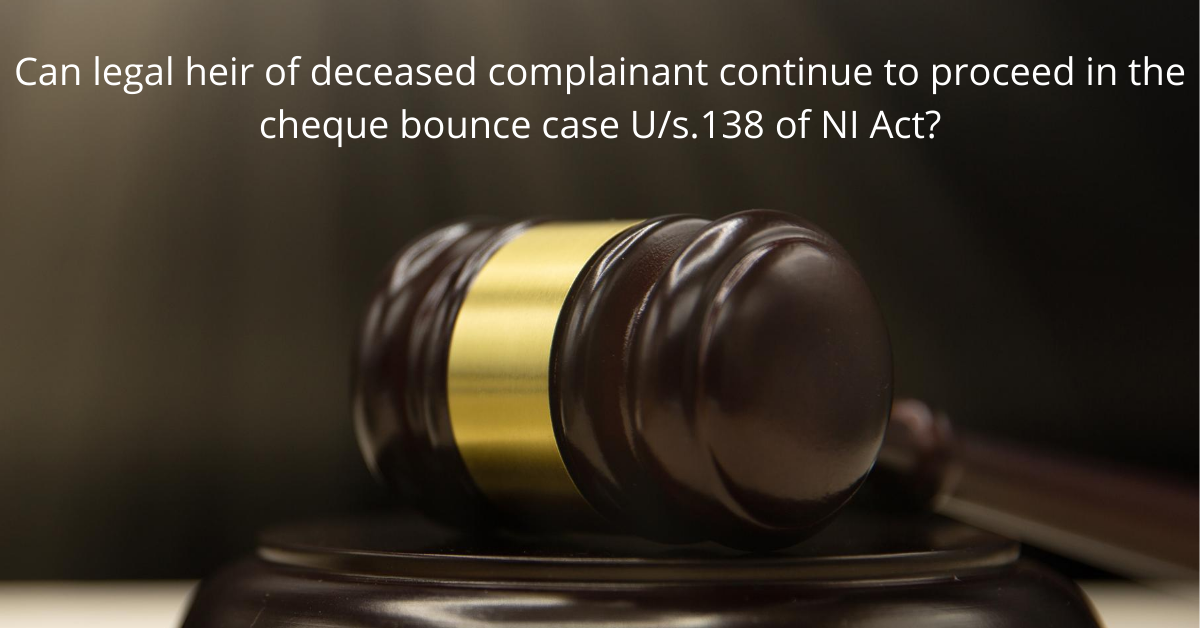 Question: If the death of Complainant in the S.138 NI Act, can legal heir of deceased complainant continue to proceed in the cheque bounce case U/s.138 of NI Act?

The answer to the question is yes. If the complainant dies during the pendency of the trial of the cheque bounce case under section 138 of the NI Act, the legal heir of a complainant can apply to the court for allowing to continue proceeding as a representative. The Court can allow such type of application under section 302 of Crpc.

After getting the permission of the court, he is entitled to proceed to continue the cheque bounce case.

Now we understand the concept of what legal provisions are mainly involved. First, We have to know the provision of S.256 of Crpc which deals with the trial of summons cases by the magistrate about non-appearance or death of complainant.

SECTION 256: Non-appearance or death of the complainant.

(1) If the summons has been issued on a complaint, and on the day appointed for the appearance of the accused, or any day subsequent thereto to which the hearing may be adjourned, the complainant does not appear, the Magistrate shall, notwithstanding anything hereinbefore contained, acquit the accused, unless for some reason he thinks it proper to adjourn the hearing of the case to some other day:

(2) The provisions of sub-section (1) shall, so far as may be, apply also to cases where the non-appearance of the complainant is due to his death.[1].

Section 138 of the NI Act is to be tried summarily and, accordingly, the procedure for summons cases provided for in Chapter XX of the Code of Criminal Procedure (hereinafter referred to as the ‘CrPC’) is to be followed during a trial started on the filing of a complaint under Section 138 of the NI Act. Section 256 CrPC in this Chapter discusses a condition of the complainant’s non-appearance or death.

SECTION 302: Permission to conduct prosecution read as under:

(1) Any Magistrate inquiring into or trying a case may permit the prosecution to be conducted by any person other than police officer below the rank of Inspector; but no person, other than the Advocate-General or Government Advocate or a Public Prosecutor or Assistant Public Prosecutor, shall be entitled to do so without such permission:

Provided that no police officer shall be permitted to conduct the prosecution if he has taken part in the investigation into the offense with respect to which the accused is being prosecuted.

(2) Any person conducting the prosecution may do so personally or by a pleader.[3].

In the case of Kushal Kumar Talukdar vs. Chandra Prasad Goenka, (2005 CRI. L. J. 599), The Gauhati High Court dealing with the question under the Crpc s.256 and s.302, rightly observed that if the death of complainant during the pendency of complaint regarding the dishonor of a cheque. After taking of cognizance of the offense by Magistrate, during the pendency of the trial, the complainant died. Therefore there was not necessary to present the complainant to prove the ingredients of offense allegedly committed by the accused. The court order to allow a son of the complainant to conduct the prosecution and to allow him to appoint a pleader of his choice to represent him in the case and to allow the proceeding to continue.[4].

9. Analogous provision to Section 256 of Code 1973 was contained in Section 247 of Criminal Procedure Code, 1898. In Section 247 the proviso was added in 1955 saying that “where the Magistrate is of the opinion that personal attendance is not necessary, he may dispense with such attendance”. The said proviso took out the rigor of the original rule and the whole thing was left to the discretion of the Court. Subsection (1) of Section 256 contains the above proviso in a similar manner. Thus, even in case of the trial of summons-case, it is not necessary or mandatory that after the death of the complainant the complaint is to be rejected, in the exercise of the power under proviso to Section 256(1), the Magistrate can proceed with the complaint. More so, the present is a case where the offense was alleged under Sections 420, 467, 468, 471, 120B and 201 read with 34 IPC for which procedure for trial of summons-case was not applicable and there is no provision in Chapter XIX “Trial of warrant-cases by Magistrates” containing a provision that in the event of the death of complainant the complaint is to be rejected. The Magistrate under Section 249 has the power to discharge a case where the complainant is absent. The discharge under Section 249, however, is hedged with the condition “the offense may be lawfully compounded or is not a cognizable offense”. Had the Code 1973 intended that in case of death of complainant in a warrant case the complaint is to be rejected, the provision would have indicated any such intention which is clearly absent.

10. In this context, a reference is made to the judgment of this Court in Ashwin Nanubhai Vyas Vs. State of Maharashtra, AIR 1967 SCC 983. In the said case this Court had occasion to consider the provisions of the Criminal Procedure Code, 1898. The complainant had filed a complaint against the appellants. The complaint was filed under Sections 498 and 496 IPC. Accused was summoned. However, during the pendency of the complaint, the complainant died. The complainant’s mother applied for substituting her to act as complainant and continue the proceedings. The magistrate permitted the mother of the complainant to pursue the complaint against which revision was filed before the High Court which was dismissed. Aggrieved by the order of the High Court the appellant had come up before this Court. In the above context, this Court considered the pari materia provisions of the Criminal Procedure Code, 1898 with regard to Section 247 (now Section 256) it was specifically held that said provision does not furnish any valid analogy. In paragraph 4 of the judgment following was observed:

“4 Mr. Keswani for Vyas, in support of the abatement of the case, relied upon the analogy of Section 431 under which appeals abate and Sections 247 and 259 under which on the complainant remaining absent, the court can acquit or discharge the accused. These analogies do not avail him because they provide for special situations. Inquiries and trials before the court are of several kinds. Section 247 occurs in Chapter XX which deals with the trial of summons cases by a Magistrate and Section 259 in Chapter XXI which deals with the trial of warrant cases before Magistrates. Under the former, if the summons is issued on a complaint and the complainant on any day remains absent from the court, unless it decides to proceed with the trial, must acquit the accused. This can only happen in the trial of cases, which are punishable with imprisonment of less than one year. This not being the trial of a summons case but a committal inquiry, Section 247 neither applies nor can it furnish any valid analogy. Similarly, Section 259, which occurs in the Chapter on the trial of warrant cases, that is to say, cases triable by a Magistrate and punishable with imprisonment exceeding one year can furnish no analogy. Under Section 259, if the offense being tried as a warrant case is compoundable or is not cognizable the Magistrate may discharge the accused before the charge is framed if the complainant remains absent. Once again this section cannot apply because the Presidency Magistrate was not trying the case under Chapter XXI.”

11. This Court further had occasion to consider Section 495 of Code 1898 (now Section 302 of Criminal Procedure Code) and this Court laid down in paragraph 7 as follows:

14.Two Judge Bench in Jimmy Jahangir Madan Vs. Bolly Caiyappa Hindley (dead) By Lrs., (2004) 12 SCC 509 referring to this Court’s judgment in Ashwin Nanubhai Vyas (supra) had held that heirs of the complainant can continue the prosecution. The following was held in paragraph 5:

“5. The question as to whether the heirs of the complainant can be allowed to file an application under Section 302 of the Code to continue the prosecution is no longer res Integra as the same has been concluded by a decision of this Court in the case of Ashwin Nanubhai Vyas v. State of Maharashtra in which case the Court was dealing with a case under Section 495 of the Code of Criminal Procedure, 1898, which is corresponding to Section 302 of the Code.[5].

Now after considered the above discussion and case laws we can get the perfect answer to the question that according to the Code of Criminal Procedure, 1973, U/s. 256, 302 in case of non-appearance or death of the complainant, the legal heir of the deceased complainant continues to proceed in the cheque bounce case U/s.138 of NI Act.

3 thoughts on “If Death of complainant, can legal heir of deceased continue to proceed in the cheque bounce case U/s.138 of NI Act?”