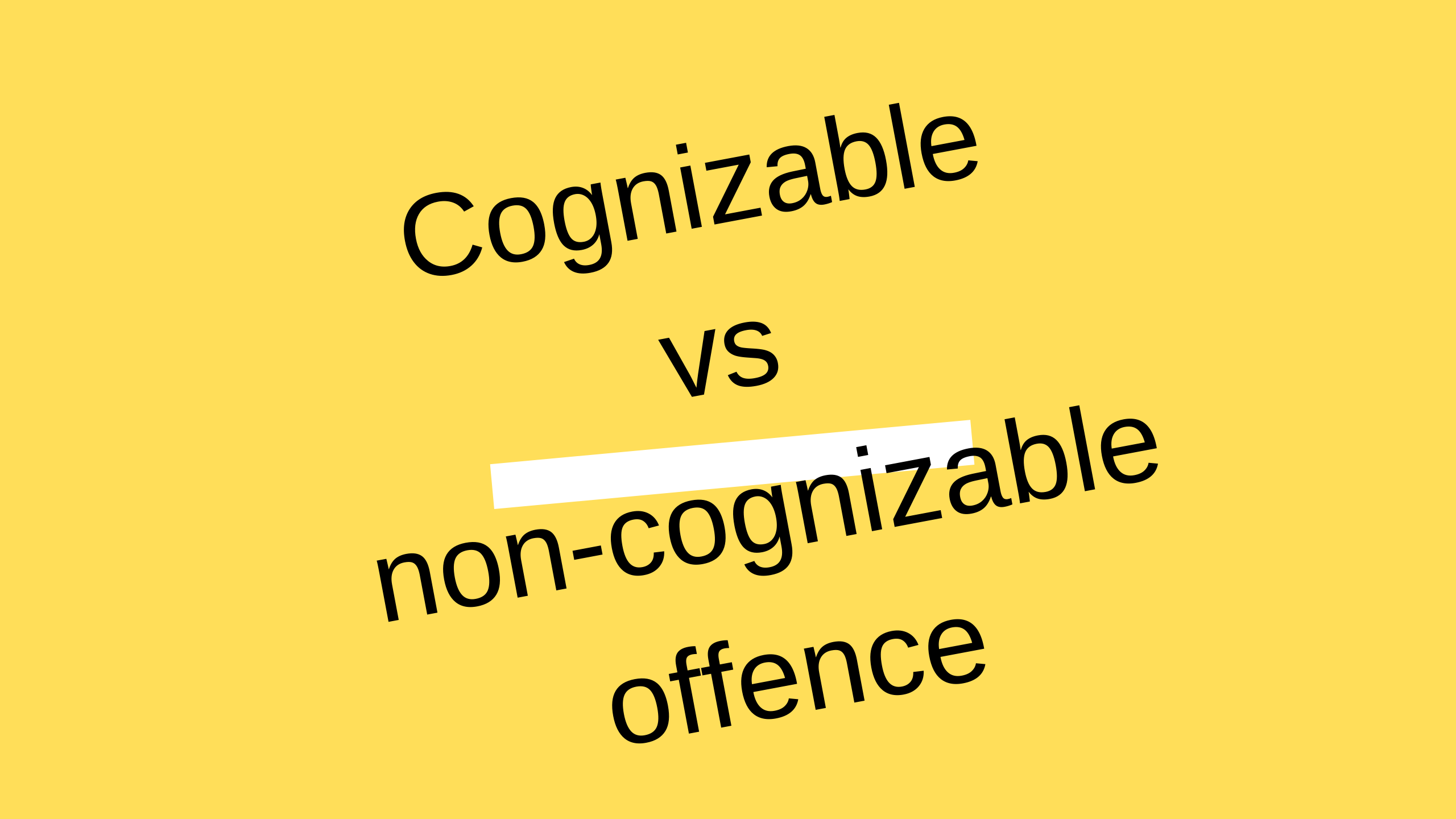 The Criminal Procedure Code, 1974, is a procedural Law, that is deals with the legal process of offensive matters related to crime. It is doesn’t matter whether criminal offences are covered under the Indian Penal Code or any other laws.

The offence means an illegal act or crime that is prohibited by law. If anyone does, he can be punished, for his illegal activities, as per the provisions of the law.

In India, any person who commits an offence that is forbidden by the Indian Penal Code, or any other criminal law, can be punished under the procedure of criminal procedure code.

As we know, crime is a crime, as well, a person can be punished who commits the offence, but sometimes we do not know that is the Difference between cognizable and non-cognizable offence?

The offence can be divided by nature and seriousness of the crime into the following terms.

(3) What is a Cognizable offence?

The definition of the cognizable offence is defined in the criminal procedure code,1974, section 2(C), according to this, we can say that Cognizable offence means such type of offence or case in which a police officer can arrest anyone without a warrant in compliance with the first schedule of criminal procedure code, or under some other law for time being in force. [1].

According to the provision of section 154 of the criminal procedure code,  a police officer is allowed to file a first information report (FIR) for cognizable offences before the FIR is registered he could conduct a preliminary investigation.

Accused must be brought before a judge within a prescribed time in the case of cognizable offences.

(4) Duties of a police officer’s in a cognizable case:

Section 154 of CrPC mentions that, In the matter of the cognizable case, any officer or in-charge of a police station will investigate the case, without an order of a magistrate. He has the power to investigate such a case, which the court having jurisdiction over the legal area within the limit of his police station.[2]

The answer to the question is yes. Section 154 is mandatory in the cognizable offence, every concerned officer of the police station is duty-bound to register a case based on the first information report (FIR) were disclosed cognizable offence.

In the case of Ramesh Kumari V/S State (N.C.T. of Delhi) and Ors. (AIR-2006 S.C. 1322), the supreme court held that The provision of section 154 of the CrPC is mandatory and the officer concerned is required to report the case on the basis of the information disclosed by him or her.[3].

Here one thing we should know that it is not necessary for that report should contain all details of the manner of offence occurrence. In the case of Hem raj and other V/S State of Punjab,(AIR 2003 S.C. 4259), the supreme court observed that A report which discloses the commission of a cognizable offence must be treated as an FIR.[4].

(7) What is a Non-cognizable offence?

In simple words, we can say that Non-cognizable means such a type of offence in which a police officer has no right to arrest any person without getting a warrant from the magistrate.

In the case of The State of M. P Vs. Abdul Rashi, (AIR 1963 M.P. 71), the Madhya Pradesh high court held that the report of a police officer in a non-cognizable case will not be a complaint within the meaning of Sec. 4 (1) (h) of the Code of Criminal Procedure although it will be so for the purposes of other enactments; for instance, under the Telegraph Act. The word ‘complaint’ as it occurs in other laws cannot be given the same limited and restricted meaning as has been expressly assigned to it in the Code of Criminal Procedure for the purposes of that Code. A case instituted on a report by police even in a non-cognizable case cannot be said to have been taken cognizance of on a “complaint”.[8].

(8) Who can order the investigation?

(7) Section 155 of the Criminal Procedure Code.