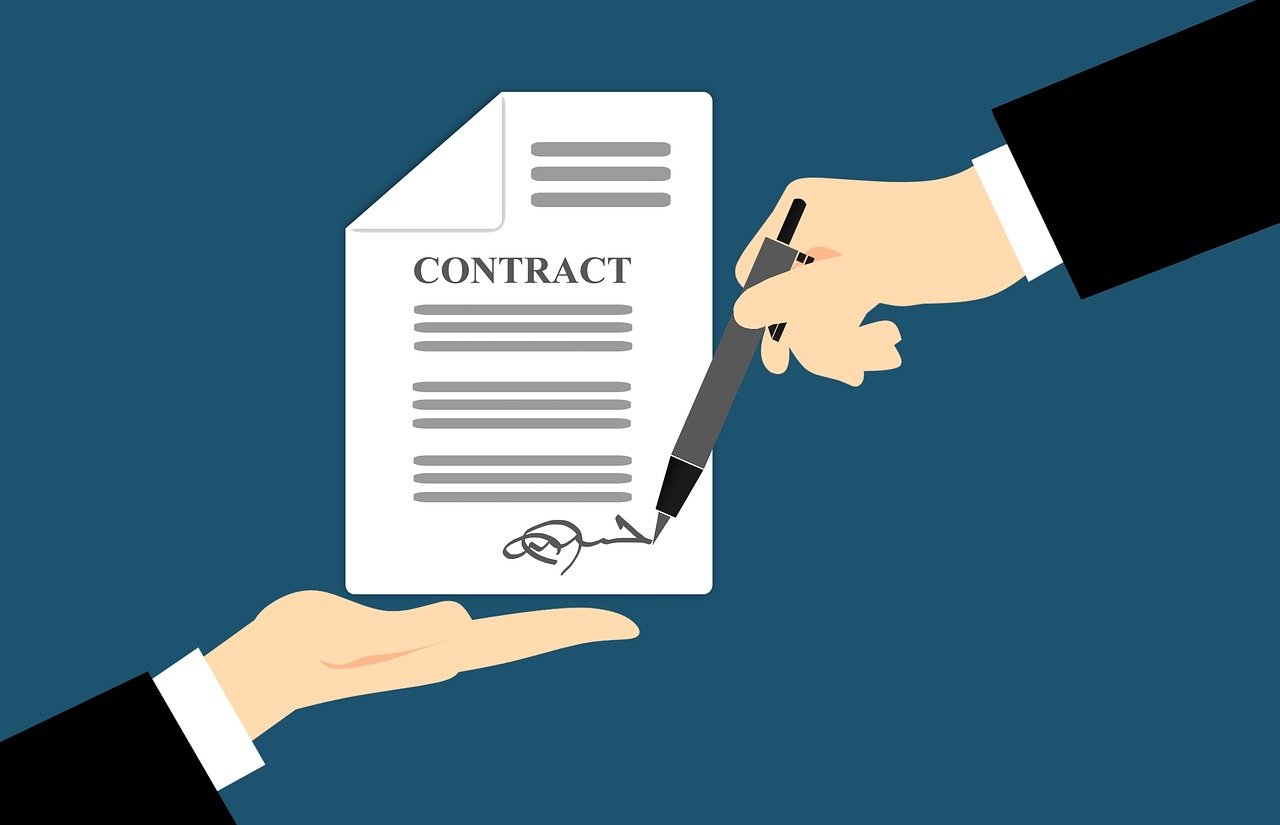 The Contract is a crucial factor for making every transaction regarding a specific purpose. There are many types of contracts available under the Indian contract act 1882. Through the agreement, everyone makes transactions healthy and wealthy it does not matter such transaction belongs globally, worldwide, or any particular country or nation. Such translation may be commercial or noncommercial.

What is a contract?

The Indian contract Act,1872, Under Section 2(e), defined the term of the agreement. According to that, every promise formed with consideration to each other is called an agreement. [1].

Under Section 2(h) of the Contract Act, 1872, is more clarify this concept according to that, an agreement that is enforceable by law is called a contract.[2].

We can say that a Contract is a significant part of every transaction. As we know, for making a legally valid agreement, two parties are required with the same concretion, free consent, and a lawful object that makes an effective contract.

When a party enters into the Contract, one question is to know which type of Contract can legally protect his right? And how many types of contracts are available which is significantly fit for their transaction as per the Indian Contract Act,1872.

Different types of contracts can be categorized according to validation, right of enforcement, the purpose of execution, etc., which are given below.

An agreement makes by the party with fulfilling their basic requirements. There is various type of requirement needed to manage or run a business. On that basis, they need to enter multiple types of contracts to fulfil their requirements. In this way, many kinds of contracts can categorize which is given below.

Types of contracts based on validity

The essential and significant requirement of every Contract is that it should be a valid contract. Here is a question that comes to our mind: What is a valid contract according to the law?

The answer is given in Section 2(h) of the Indian Contract Act,1872. According to that provision, an agreement that is enforceable by law tat should be a contract.

According to that section, we refer to the provision of Section 10 of the contract act. There mention the criteria of a valid contract.

In the case of Commissioner of Income Tax, Punjab vs. M/s. Panipat Woollen and General Mills Co. Ltd., Chandigarh. (AIR 1976 SC 640), the Supreme Court held the Rule of construction of a contract. The Court, in order to construe an agreement, has to look to the substance or the essence of it rather than to its form. A party cannot escape the consequences of law merely by describing an agreement in a particular form though in essence and in substance, it may be a different transaction.[4].

In Fort Gloster Industries Ltd. vs. Sethia Mercantile (P) Ltd. (AIR 1968 SC 1308), the Supreme Court held, Terms of the Contract required to be in writing cannot be proved otherwise than by offering the document itself in evidence.[5].

In S. V. R. Mudaliar vs. Rajabu F. Buhari. (AIR 1995 SC 1607), the Supreme Court held The enforceability of a contract is not dependent on the existence of the intention of parties to create legal relations.[6].

If we look into the other criteria of a void contract, as discussed above, parties’ free consent must be required for making a valid contract. However, it happens that parties of the Contract mistakenly give their consent for the Contract. In that case, an agreement might be void according to the law but said mistake should be mutually made by the parties, not other than else.

We refer to the provision of Section 20 of the contract act; there is specified that. When the parties make the essential fact of an agreement under the mistake of law, that agreement is void in the eye of law.[8].

The important thing here is that parties must mutually make a mistake, and both parties must show how they suffer due to mistakes.

In the case of Tarsem Singh vs. Sukhminder Singh, (AIR 1998 SC 1400), the Supreme Court held that An agreement would be void if both the parties to the agreement were under a mistake as to a matter of fact essential to the agreement. The mistake has to be mutual, and in order that the agreement is treated as void, both parties must be shown to be suffering from a mistake of fact.[9].

In the case of Badri Prasad vs. State of M.P.(AIR 1970 SC 706), the Supreme Court held, If unconditional acceptance is not made where there is an invitation to other parties to make offers, there is no contract. (Promise).[10].

An unenforceable contract means an agreement that courts can not enforce. Many different reasons will arise according to the subject matter of the Contract. But when some technical defect occurs in the Contract, then the law cannot enforce one or both parties of the agreement.

For example, Mr A agrees to sell to Mr B 50 kgs apple for rupees 500/- but the storm comes into the country, and due to that reason, all trees are damaged. In this situation, said Contract becomes unenforceable, and the parties to the Contract can not enforce it.

The Contract Act,1882, section 23, deals with unlawful or illegal agreements. This section specifies some conditions that make an unlawful Contract.[11].

Section 23 of the Act describes some conditions when an agreement may be unlawful or illegal. There is a distinction between void contracts and illicit contracts. Illegal contracts are agreements whose object or consideration is legally barred. In the case of void agreements, the law may merely say that the courts will not enforce it if it is made.

As a result, all illegal agreements or contracts are null and void, but all void agreements are still not. In the case of both unlawful and void contracts, the similarity is that the preliminary agreement is unenforceable in either case. Under either type of agreement, nothing can be recovered, and if something has been paid, it cannot be reclaimed. As a result, a party who has violated a contract has no remedy.

Types of contracts based on nature of creation

Based on the contract requirement, various types of contracts can be made, as per the nature of creation or the purpose of the Contract. That can be classified into different types of Contract which are given below;

In the essentials of the express Contract, we can say that the party must mention the terms orally or in writing when entering the Contract. And that offer is accepted by the other party of the Contract ( who agrees with the proposal).

For example, if you want to sell your car and offer A for Rs.10000/- and A also agrees to buy the vehicle for the mentioned price. That means you have an express contract. A states his intention and communicates that he is bound with terms which you offer.

For the example of the implied Contract, we can say that suppose a customer who wants to consume food and enters a restaurant for food. Here, the restaurant owner agrees to serve the food, and the customer also agrees to pay the money mentioned on the menu card of the restaurant.

This type of Contract does not come by way of agreement between the parties of the Contract. However, due to any particular circumstances by the law, that may consider as a contract. The quasi-contract may exist after the interference of the Court.

We can say that the quasi-contract, which is the obligation of the Contract, comes with interference by the Court; for natural justice. The main aim of that Contract is that any party of the Contract can not take unfair advantage for harm to the other party of the Contract. Which is not mentioned in the agreement, and there is part of a dispute between the contract parties.

Let’s see the example of quasi-contract; suppose Mr A makes a contract with Mr B to deliver goods to his godown. But accidentally, Mr B did not deliver that good to Mr A godown, but he delivered it to Mr C; now Mr.c used that good and denial to pay for it.

In this situation, after refusing to pay by Mr C, all the burden comes on Mr.B. in that case, the Court orders Mr C to pay, which he declined because he uses the goods.

Types of contracts based on execution

There are many kinds of contracts that can be defined based on the execution, which is mentioned below;

When the two or more parties of the Contract agree to the terms and conditions of the agreement and accept a contractual relationship between them, they execute and sign the Contract. After being signed by the party, they are legally binding with the written agreement.

In simple words, we can say that when the parties of the Contract agree to perform their respective part of the Contract, that is called an executed contract.

Generally, the buying of goods or services is covered under this Contract. The sales contract covers that category, the buyer pays the money, which is the purchase from the seller, and the seller transfers the title of goods or services after receiving the money. In this type of Contract, the promises are made as well that is immediately completed.

Let’s see the example of the executory Contract;

Unilateral contracts are one-sided contracts that are legally binding to the party of agreement when one party agrees to pay for some specific act. That type of Contract may be used when the offeror is ready to accept an open request and willing to pay for some particular action.

In that Contract may be involved by one person or group for taking action. As per the law, only one person is allowed to make an agreement or promise in unilateral contracts.

Let’s see an example of a unilateral contract;

Generally, we often see the reward contract as a prevalent example of that Contract.

For example, someone releases a press note that he is ready to reward a lost dog, certificate, mobile, etc. if someone has got it. By using this type of willingness, the offeror creates a unilateral contract for a specific bonus if the lost item is found.

In the bilateral Contract, both parties of the agreement play their role as a promisor and promisee. Here the mutuality of obligation is an essential part of the enforceability of such a contract. That’s why it is known as a reciprocal contract too.

Any kind of sales agreement is a perfect example of such a contract—Mr. A wants to buy a motorcycle and agrees to pay the price to the seller. Here the amount is exchanged for the title to the bike. The seller agrees to deliver the motorcycle title in terms of exchange for the amount of the vehicle.