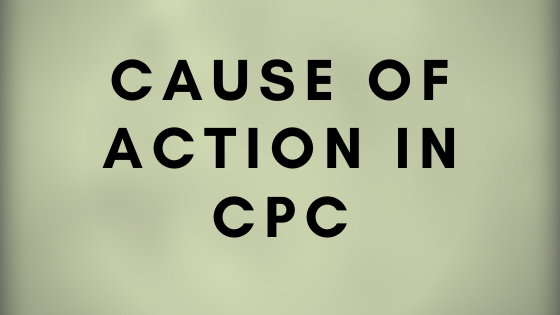 What is cause of action?

The cause of the action is a bundle of facts which allow a person to establish his or her legal rights against another. If any person is violating his constitutional rights because of certain circumstances, he can defend his right instantly. He must show how his lawful right has harmed in all these things.

Meaning of cause of action:

The legal meaning of the cause of action is that the plaintiff has the right to take legal action against another person on the basis of the facts. A plaintiff can thus secure his constitutional right by bringing a lawsuit against the defendant underlying it.

The primary aspect of the case is the cause of action. Without a particular object of the act a complainant’s suit may be dismissed. The court may decline to consider a complaint if the case is without cause for action.

Definition of cause of action in CPC:

Under Section 20 of the Civil Procedure Code, 1908, “cause of action” means any fact that must be produced in favor of the right to obtain a judgment.

According to the case of Om Prakash Srivastava v. Union of India and Anr. (2006 6 SCC 207),[1], The Supreme Court noted, in the following words, tried to clarify the expression:

“Cause of action” means, in the restricted sense, the circumstances which constitute a infringement of the right or the immediate cause for the reaction. In the wider sense it implies the conditions required for the enforcement of the action, including the violation of the right and the violation combined with the power itself. Compendiously, as noted above, the expression means any fact that the plaintiff would need to assert, if violated, to maintain his right to the Court’s judgment. Every circumstance that is required to be established, as distinguished from every piece of evidence that is necessary, to prove that every fact is part of “cause of action.”

In the case of  Bloom Dekor Ltd. v. Subhash Himatlal Desai and Ors. (1994 (6) SCC 322), [2], The Supreme Court held that “cause of action” applies to all facts which, if present, would enable the plaintiff to show support for his right to a Court judgment. That is, a bundle of facts that the plaintiff will prove to be successful in the suit.

In the case of Sadanandan Bhadran v. Madhavan Sunil Kumar (1998 (6) SCC 514),[3], The Supreme Court held that in a general and broad sense (as in Section 20 of the Code of Civil Procedure, 1908), “cause of action” means any fact that must be formed to justify the right to obtain a judgment.

In the case of South East Asia Shipping Co. Ltd. v. Nav Bharat Enterprises Pvt. Ltd. and others. (1996 (3) SCC 443),[4], The supreme court held, It settled law that “cause of action” consists of a bundle of facts which provide grounds for enforcing the legal inquiry for redress in a court of law. In other words, it is a sequence of events that gives the plaintiff the right to claim relief against the defendant, taken with the law specific to them. It must contain any act committed by the defendant because, in the absence of such a statute, no cause of action can likely arise.

Jurisdiction of cause of action in CPC:

According to Section 20 of the CPC, a plaintiff may bring a suit within the jurisdiction where the defendant resides or carries out business or personal work for a benefit or in full, if there is some part of the action’s purpose.

In some cases, where two or more courts have jurisdiction for a suit dispute, the parties may file suit between courts in those circumstances to the jurisdiction of any one court.

In the case of Harshad Chiman Lal Modi v. D. L. F., Universal Ltd. and another (AIR 2005 S C 4446), [5], The Supreme Court ruled, Simple reading of Section 20 of the Code, leaves no room for doubt that this provision is residual. It includes all cases that do not fall under the boundaries of Sections 15 to 19. The “Subject to the above limitations” section ‘s opening words are important and make it abundantly clear that the section covers all personal activities within its scope. Consequently, an action referred to in Section 20 may be brought before a court within whose jurisdiction the defendant resides or carries on business or operates in whole or in part for the benefit or cause of the action.

In the case of Rajasthan High Court Advocates Association vs. Union of India and others (AIR 2001 SC 416),[6], The Rajasthan High Court held, Every fact that is necessary to prove, as distinct from any piece of evidence needed to prove each fact, requires ’cause of action.’ In each case, it must be left to ascertain where the cause of action occurs.

In the case of Canon Steels P.Ltd. Vs Commissioner Of Customs (2007 AIR SCW 7253),[7], The supreme court held that even if a small part of the case occurs within the competence of the High Court, it may refuse to exercise its discretionary authority.

In the case of Shriananjaiah Vs. Chief Mechanical Engineer,(2007 (5) AIR Kar R 234),[8], The Karnataka High Court held, Place of residence for jurisdictional purposes is the place where the employee works and ordinarily resides and not the place where he is born or native.

In the case of New Moga Transport Company vs. United India Insurance Co. Ltd. and others (AIR 2004 SC 2154),[9], A supreme court ruled that, where two or more courts have jurisdiction to sue, the parties may, by agreement, submit to the jurisdiction of one court for the exclusion of another. Such an arrangement is not struck by Section 28 of the Contract Act,1972, nor can it be claimed that such a contract is contrary to public policy. It is legal, enforceable, and true.

What is split cause of action under CPC?

Pursuant to Rule 3, the applicant was entitled to bring an action for the same cause of action. The plaintiff can not, even so, bring in a separate purpose of the operation by making part of it.

Similarly, Rule 3(2) stated that a person might bring more than one relief for the same cause of action. But when he omits support with permission from the court, he can not bring a suit again for that relief.

Joinder of cause of action:

Order 2, CPC Rule 2, mentions a cause of action in the joinder. The plaintiff or the plaintiff may have several (more than one) causes for the defendant to take action. If such an action is brought together, the court’s jurisdiction will settle on the value of the case at the time the complaint is filed.

Misjoinder of cause of action: